Last Spring, we started the project by trying to take a chain saw to the areas and that was able to produce a pretty good result.  But there were some complications.  Growing up with the little trees was some wire fencing, random fence posts and a dog kennel.  At first the solution seemed pretty straight-forward.  I just figured that I would remove the odd fence posts and other wire items and then get after it with a chain saw.  The problem is that some of the “little trees” were actually about 4-6 inches in diameter and had actually grown in such a way that the wire fencing and even the fence posts are now a part of the tree! 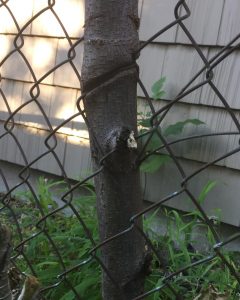 I had to abandon the chain saw because of the potential contact with fence posts and wiring.  I currently am trying to hand-saw the trees in sections in hopes of starting to loosen the trees grip in the other materials and then can be removed.  It is challenging but instead of getting frustrated I am seeing it as a challenge that eventually I will win.  At least that’s how this story plays out in my fantasy world!!!

One problem that has been resolved in a wonderful and instructive way has to do with more little trees woven in the chain link fence.  With most of the tree removed, there remains section of about a foot and a half of tree trunk that is about 2 inches in diameter.  I bought a tool that is designed to prune branches up to about that size and so I figured I was ready to go!  I took the tool to remove the troubled spot but couldn’t get enough leverage to break it free.  I tried several different approaches and spent about 15 minutes with no success.  Tired and frustrated, I sat down to rethink my options.

What I wasn’t aware of while I was attempting to remove the tree trunk was my neighbor watching me.  He is about 30 years old and doesn’t say much.  He’s probably trying to figure out what he did that God put him next door to a preacher!  Anyway, as I was just sitting down, he walked over and asked if he could help.  I figured that I would explain to him the hopelessness of the situation and figure out what tool I would need to get the job done.  While I started to tell him my problem, he grabbed the tool I had been using and in about 15 seconds removed the tree!  I had been looking at that problem and trying to figure out how to fix it without success since we moved here over a year ago.  My neighbor solved it in seconds without breaking a sweat!

I learned several lessons from my neighbor that day:

The bottom line is that I sometimes think I can do it all myself.  I hate to admit that but sadly, that is the only conclusion I can draw.  Pride, the sin of thinking more highly of oneself than they ought, is an area of life that the Lord is still refining in me.  One thing that helps me to deal with it better is by refusing to call it anything else than what it is: sin.  Maybe that seems a bit too harsh of a judgement of the behavior.  Maybe, but I don’t think so.  For me, calling it a sin intensifies the significance of the behavior and my need to repent of it.  To call it anything else runs the risk of giving myself a pass and I know where that leads:  continually repeating the behavior instead of eliminating it.

What about you?  Are there areas of life which are probably more accurately defined as “sin” but you have given it a name that is less offensive?  One area I deal with and see countless Christians as well is the sin of idolatry.  Idolatry is when we place anything before God.  Anything.  Let that soak in:  Anything!  Is there anything you put before God?  Common places I see Christ-followers struggle are in the area of family, work, hobbies, finances and time.  I share the struggle with you and probably will until I die.  The point I encourage you to consider is what are YOU doing about it?  Calling the practice of putting anything ahead of God any other name than idolatry is really just an attempt to justify what we know needs correcting.  So why not call it what it is, confessing it to the Lord and letting the Spirit direct you in a different direction?  In the meantime, I will be extra nice to my neighbor for preaching me a 15 second sermon without any words!  Impressive!