I have tried to pick up the phone many times in the past two years but then reality sets in and I realize my days of calling my dad are over.  He died quietly in his sleep two years ago today.  We had made plans to see him later that morning as we always did on Tuesdays.  Instead, this date has taken on a very different meaning and around this time of year I can feel the reality of that difficult time with fresh intensity.

I have noticed that my memory of his passing is starting to fade a bit.  One detail that I have been thinking about over the past few days is the final conversation I had with him.  In some ways it is very uneventful and in some ways it serves as a reminder that has helped me today and many other days. 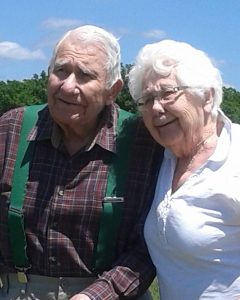 For as long as I can remember, whenever me or me and my family were traveling away from our home my dad always asked if I would let him know when we had gotten home safely.  I have been making those calls for literally decades!  Apparently, me being on the roads or in the air was extra troubling to him and he seemed to rest easier when he heard my voice and affirmed that I am safe and everything if fine.

The last conversation I had with my dad was from just a few miles away from my then home in Topeka.  We had been away for about a week visiting 2 of my children and their families in Texas and were about to finish the nearly 1000 miles of driving for the day.  I was tired but knew I needed to give dad a call to let him know we were good.  I picked up the phone and quickly told him the facts.  We are about 5 miles from home.  The car is running great.  We had a great time and we are well.  I don’t know how long the conversation lasted but probably less than 2 minutes.  I could tell from his voice that I had checked all the boxes for what he was concerned about and he drew a sigh of relief.  We finished the call by reminding him that we would be by on Tuesday, 2 days later, to check on him and we would have a good visit.  He said, “That sounds good!  I just glad you made it safely home.  I can rest easier now!  Goodnight.”

By Tuesday morning at 4:30 he was gone, dying in his sleep.  I have often thought that he was somehow waiting to die until we had gotten our visit to family in Texas complete and safely off the roads.  Life is funny that way and I know I will never know any of that.

What has been an interesting development from those seemingly unimportant words we shared is an intensity within myself concerning the subject of “making it home safely”.  I haven’t started an ad campaign for seat belts or obeying traffic laws.  No, my meaning has to do with the way we prepare during our time on earth for when we will spend eternity with God in the new heaven and new earth.  As a Christ-follower I am learning more and more of what God has in store for His children, the Body of Christ.  I am discovering that with the time I still have left on the earth before I die I have one opportunity after another to pray and help facilitate the will of God being done on earth as it is in Heaven.  I am finding a renewed energy and vision, (2 things not usually associated with guys in the 60’s) for the work of God and am feeling His guidance with a greater intensity.

On the 2nd anniversary of my dad’s death I remain a bit disoriented because he is gone but what has become crystal clear is my desire to “arrive home safely”.  And while I can’t add anything to God’s grace being given to me through Christ, I am determined to live in such a way that brings Him the glory He so richly deserves until I “arrive home safely”!