I can still remember how excited I was to get my first pair of glasses.  I guess no one told me or perhaps I wasn’t listening to anybody who told me wearing glasses would be anything other than “neat”!  Once I got them, I noticed 2 things:  first, I noticed how really poorly I had been seeing before.  I had no idea how much of what I was seeing was really rather blurred and blah.  Putting on the glasses was a bit overwhelming!  But, I also noticed another thing:  I noticed that wearing glasses was kind of a pain.  I had to be more careful, something every 11 year old boy is great at!  They restricted some movements, they fogged up at different times and then there were the comments from people like “hey four-eyes!”. 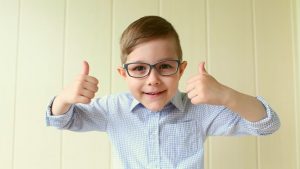 As time passed, I have gotten used to my glasses and have learned to adjust my head movements and other habits accordingly.  My eyes have progressively gotten worse and now I have entered the wonderful world of bifocals.  Talk about adjustments!  Still, I am always grateful when I put them on and almost miraculously I can see clearly.

Lately I have been thinking about how God’s Word, the Bible, is a lot like glasses.  As we read it we discover all kinds of truths that we are told come from God’s mind through God’s voice, the Holy Spirit.  I wholeheartedly accept that assertion.  But the adjustments required of me as I attempt to view this world with a biblical worldview are definitely challenging.  Having a clear, biblical worldview enables us to see with much greater intensity and clarity that which so many others simply can’t see.  Jesus alluded to this when in a conversation with a man named Nicodemus He reveals, “no one can see the kingdom of God unless they are born again.” (John 3:3b)  It is as if the tables have been turned.  Me and other Christ-followers have the ability to “see” that which those outside of Christ just can’t make out.

I vividly remember my mom, when I would balk at having to wear my glasses, reminding me that if I continue to faithfully wear them, even when it was a bit troublesome or inconvenient, I would get used to them and eventually I wouldn’t even realize I had them on.  Of course, my mom was right.  She also had worn glasses for the better part of her life and knew exactly what she was talking about.  That reality would also translate well when thinking about seeing the world with a biblical worldview.  It will often be inconvenient, but the more determined we are to consistently accept what God says as true will reveal a world that is not only much clearer but will enable this new way of seeing to  eventually become 2nd nature to us.

As a minister of God’s Word, I feel strongly that one of my chief tasks is to not only be committed to the truth of God’s worldview found within the Scriptures but also to model and train others to see the importance and worth of putting on the sometimes cumbersome, inconvenient lens which lead to a biblical worldview.  It is a great joy when I hear some within the flock say they are seeing God’s Word and world in a fresh, renewed way.  A word of warning:  as you start to live your life through the lens of a biblical worldview, expect puzzled looks from many, perhaps even those closest to you.  You will also be tempted not to accept what your “new eyes” are showing you because it is so different than what everyone else sees.  Trust His lens, reread the Word to make sure you are seeing accurately and then move confidently.  As you do, you will shine brightly, distinctly and beautifully in a dark world that God envisions and has made great provisions to be very different.