It won’t be picked up by the local TV or radio and it will not make it on the pages of any newspaper but a tragedy occurred on Chatham Street last night.  Camille and I were relaxing outside and enjoying the gentle rain from the comfort of our covered patio.  Suddenly a terrible shrieking sound could be heard that was very intense and very close.  We quickly jumped up and made our way to the front yard to discover our next door neighbor gently carrying their little dog.  It was now clear that the sounds we heard was the dog being hit by a vehicle.  Adding insult to the injury:  the driver never bothered to stop.

We went back to the patio to continue the evening when we notice our neighbor making his way to his backyard.  He was carrying a shovel.  We assumed that the hit dog was just injured and would bounce back after some treatment and rest.  Sadly, the little dog died and now the neighbor, a man I guess around 30, was heading out to do the sad task of digging a grave and burying the dog.  We watched as his wife and their 2 children, both under 5 in age followed daddy out into the backyard.  He struggled in the saturated earth to get the job done but eventually he did and slowly the family started to make their way back inside the house.  We watched him pause to take the garden hose to rinse off his shoes and the shovel and noticed the tasks were taking a little longer than it should have.  We walked over to the fence to express our feelings of sadness at what had obviously happened and to encourage this young father. 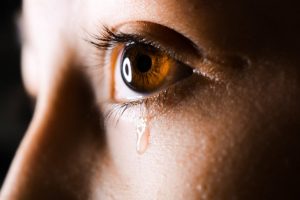 He was fighting back tears as his now completed task was done.  I think he was a little embarrassed until I told him that when I had lost my last dog I wept like a baby.  It was about that time that his tears really started to flow and I noticed my eyes getting moist as well.  He looked me in the eye, reached out to shake my hand and thanked me over and over.

Back now on the patio, I began to reflect on what had just happened.  Why was I wiping away tears?  It wasn’t my dog and frankly the little guy had made a nuisance of himself on more than one occasion!  Why has this event had as profound effect upon me as to write about it?

The answers I discovered may shock you and maybe even offend you but let me try my best to explain.  The reason I was fighting back tears is because I am a human.  Contrary to what some people believe or think or even have been taught, humans express emotion and yes, sometimes that means tears.  I have experienced enough grief and have intentionally tried to help others deal with their grief to know this is a big problem.  Men especially struggle with the concept of expressing emotion, particularly emotions of grief.  I, like many other men, have repeatedly heard the idea that men don’t cry or express emotion, especially in public.  This, we are told, is a sign of weakness and must be avoided.  Real men don’t cry!  This problem was echoed in the discussion time of a support ministry Camille and I lead called Griefshare.  100% of the group expressed various levels of frustration and reactions from others that have contributed negatively to their effectively processing their grief.

In all fairness, I must admit that I came to the conclusions I currently possess not so long ago.  I had not really had to deal with a significant loss of someone until my mom died.  It was only after some soul searching that I discovered what was really going on with my increased irritability, loss of interest in certain things, fatigue, desire to eat everything in sight and restlessness.  About that time, while visiting my physician for my annual physical, he was asking me if there had been any significant life changes since my last visit.  I asked him what he meant and he said:  like job change, move, or death of a loved one.  I told him about my mom and he said that my symptoms were likely all related to her passing and asked me about a couple of more that made me think he might be psychic!  This awareness triggered a journey of self-discovery that has radically changed my life.  Part of that journey is what led me to Mississippi and given me a perspective that is helping me experience God’s grace and blessing in my life and ministry more than I have never seen before!  The journey of my life could have been very, very different.

And so I cry.  I cry when dogs who I really aren’t crazy about get hit by cars.  I cry when classmates I haven’t seen in decades die.  I cry when I am around others who are crying.  I cry.  Now, I feel much less awkward when I feel the tears start.  If they start while you happen to be around me I will try and not be a jerk when you ask me why I am crying.  I will try to focus upon the event that stirred these emotions.  I will try my best not to say, “because I am a human!”  But I won’t make any promises!